Adelpha is the home world of the Talan and is filled with rich culture and many native life forms roaming the land, seas and air. During your adventure in Outcast you visit six different regions of Adelpha. A seventh region, the island of Kizaar, is mentioned but you cannot actually visit it in the game. 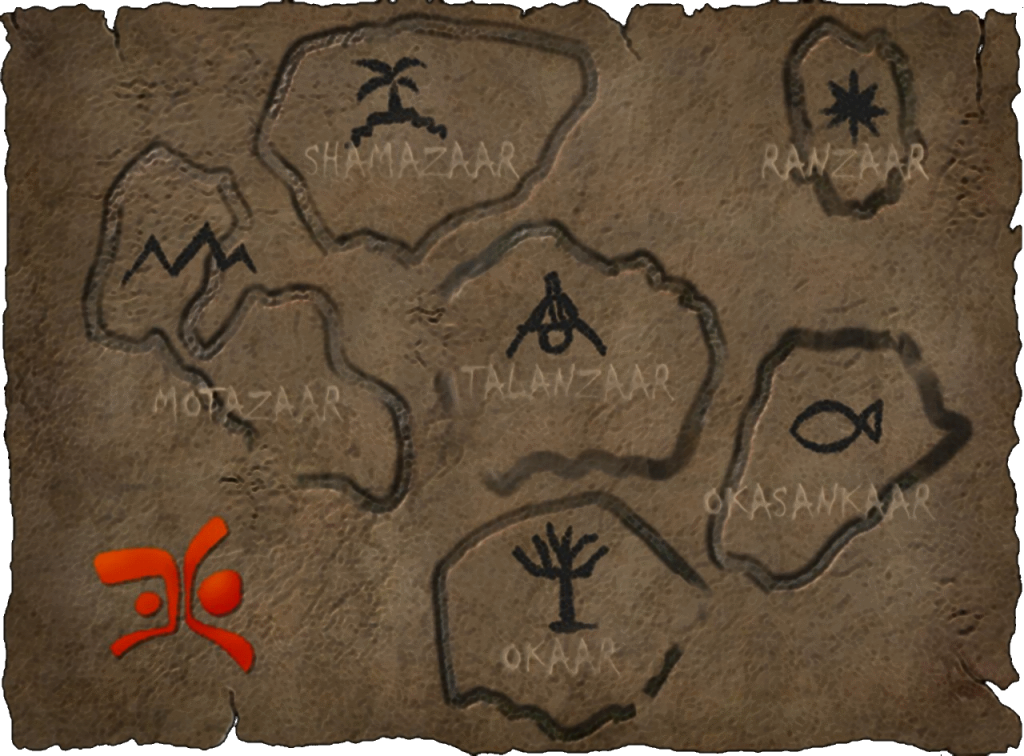 Motazaar is a region which is best explaind as the lava world of Adelpha. Most of this region has rocky terrain and contains huge craters filled with volcanic lava. Very little plantlife grows here because of this terrain and there are also not many animals to find. The Talan that resign here are mineworkers that mine Helidium (crystallized mineral) from the rocks in this region which holds essence that once crafted can be made into a deadly weapon.

Okaar is the forgotten region of Adelpha, it’s mostly unexplored and mysterious. The landscape is mostly hills with dense forest and ancient structures can be found all over this region which shows the land has a rich history. Okaar holds creatures not seen anywhere else on Adelpha: Oogoobar. The Oogoobar is a tribal society of primative Talan and have a white/grey skin instead of the brownisch the Talan usually have.

Okasankaar is a region almost completely covered in water. The landscape of the area slowly rises up to a central plane with the city of Cyana on the north-west edge. Cyana is the only settlement in Adelpha that is close to open water. It has docks that are used mostly by the fishing boats of the Talan who live there but it is also the only way to reach the outer islands in this region. The holy Darosham was built in this region, as well as the only prison of Talan culture, Zorkatraz, which was built in the water. The Daoka to Okriana is located near the city, the one to Shamazaar is further out on the plane, further still is the only Daoka that leads to Okaar.

When you start playing Outcast, you begin in the region of Ranzaar which is high up in the mountains with a constant winter that fills the entire region with snow. Ranzaar holds sanctuary to the Dolotai guardians. These are Talans that defy Fae Rhan’s power. They help the Ulukai (Cutter Slade) to restore balance to the essences and Adelpha.

Shamazaar is the tropical region of Adelpha and is also known as the World of Temples. The region is notable as a center for religious activity on Adelpha, with temples built for each of the four Essences and their respective Yods contained within. The Temple Fae is the largest by far after being rebuilt by Fae Rhan, resembling a fortress in current times. It is also home to the Well of Essence, which all young Talan must come to visit when they reach adulthood in order to awaken their specific essence, indicating their role in society. This fertile region is also the primary source for riss across the planet. Rice paddies cover 80% of the habitable surface, most of the Shamazaar population are working as riss farmers. Though the harvested riss is exported to other regions via the Daoka, the majority of it goes to feed the Soldiers of Fae Rhan, leaving common Talan with very little. Many tree stumps can be seen dotting the region, indicating it may at one point have been far more densely forested.

Talanzaar (World of the City)

Talanzaar is the region where all traders and merchants come to drive the economy of Adelpha. Before Fae Rhan arrived this region was very much alive. It was a vast field of Purple Grass, all homes were one with the land. No roads were built, or large structures to be found. The Talan lived a simple life of hunting and farming, then after the death of Kazar, Fae Rhan arrived and everything changed. He ordered a palace to be built and a city around the palace.

Talans use Daokas travelling through the world of Adelpha and its regions. These are large circular shaped structures that work like gateways between regions.

The world of Adelpha is filled with beautiful flora. You see it everywhere you look and every region you visit. Below are some examples.