How it all started

Back in 1994, the developers of Outcast were still working at Art & Magic, but their latest Arcade games had been a real disapointment. Those games were relying on ageing hardware and they started pitching new ideas to the hardware guys, both in term of game content and technology to support it.

The 3D revolution had already started and they were stuck with 2D sprites. They didn’t have a lot of experience with realtime 3D at the time, but they knew polygon games were very basic looking because of the inability for hardware to push enough triangles per second to create reallistic environments and characters. So the developers were looking for alternative solutions.

Some papers had been released about rendering technology using volumetric pixels, called voxels, to store 3D objects. Franck Sauer remembers having a dinner with all the executive staff, with Yves Grolet, Yann Robert and Michel Caubo talking about ways of storing voxels in octrees and using ray casting methods for accessing and rendering the data. Having the ability to design custom hardware in-house, we were excited by the prospect of developping a specialized hardware for voxel rendering.

That excitement didn’t last. In the end, they all agreed it would be cost prohibitive (read impossible) both in term of memory and power to render voxels with the available technology. They went back to blueprint stage, and Yves was starting getting on the nerves because the hardware was not capable of following the vision they had about the games they wanted to make.

At some point the company started working on a european project involving other designers and manufacturers around the design of a 3D polygon gpu. As with most european projects, each company would try to get as much money as possible with as little involvement as possible. In the end, needless to say nothing came out of this mess.

During those last years, the commodity CPUs had been evolving at a dramatic pace. At this point Yves started wondering if dedicated hardware would ever catch-up the exponential acceleration of CPU power and flexibility. Of course the vision was a little biased, Deltatec (the hardware company) didn’t have the muscle of say, nVidia, or other modern gpu manufacturer. The developers however had games to make and visions to fulfill.

Besides its power, using the CPU was very tempting because it allowed for complete freedom of pipeline development. Basically, you had a number of available cycles, and within those cycles you could do whatever you wanted. The limit was only set by your imagination and programming skills.

The developers first had this idea of 3D game set in a fictional south-american country, were you as a player would have to infiltrate a drug cartel in first person POV to free some abducted tourist from the local drug baron.

Then, as is often the case, the idea evolved. they kept the natural enviroment but moved the settings and story to an alien universe that would later become Outcast.

Yves had this idea about a team travelling through multiple universes at quantum distances appart. The objectives were taking shape, it was time to prove the concept through a working prototype. 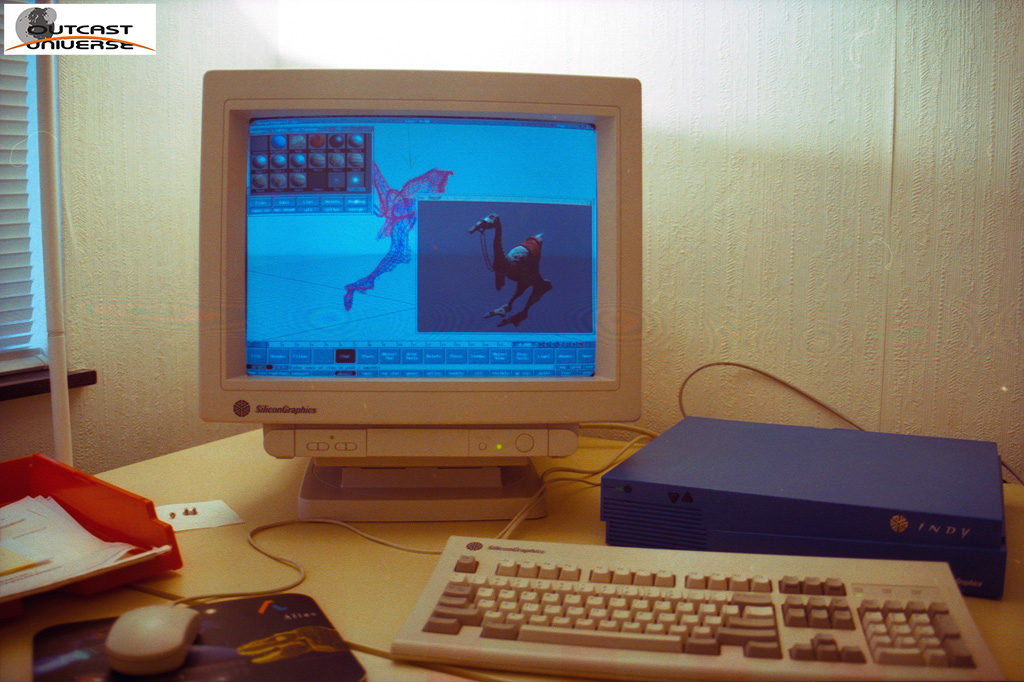 As the relationships between the team and the hardware guys was starting to erode, they decided the project would be better hosted by a new, separate company. Appeal was born, on paper at least. Themes, the hardware holdings, would fund the prototype and own a large minority stake in the company, until some external funding was found to complete the project. The rest of the shares were equaly split between Yves, Yann and Franck.

How it all started

Yann and Franck agreed to stay at Art & Magic to provide the content support while Yves made the first move and settled with Philippe Zondack, another programmer, in a small office in an incubator space near the Liege University campus. They were going to work there on the voxel rendering engine.

Franck designed the first wave of alien characters, including Talans and Twon-Ha. He did some 3d Models in Alias Power Animator (running on Silicon Graphics workstation) using painful nurbs technology. At first it was planned to do some pre-rendered sprites for all characters (they would later switch to real-time polygons) so Iwan Scheer did some animation and Franck made renders of those in Alias.

When the prototype was up and running they started looking for a publishing partner to provide the funding for the full game.

The first on the list was Ubisoft, so they went to Paris and showed the concepts and prototype. They were not interested.

Next stop was Infogrames in Lyon. Infogrames had been very successful with their Alone in the Dark series and were looking for a new technology-driven project to help pursue their expansion.

The developers met with Eric Mottet who was very impressed and supportive of the technology and reported directly to Bruno Bonnell, Infogrames’ CEO. A few days later, the developers signed an agreement for both a buy back of all prototype assets produced by Art & Magic, most of the large minority stake from Themes, and a worldwide publishing and distribution agreement for the game.Before the developers went back home, Bruno Bonnell gave them a 150k euros check, he signed on the corner of a table, to setup the new office and start working on the game, something he told the developers with a smile he had never done before. Because of his financial commitment to the project, Bruno was awarded his name first in the credits. In the end, the game’s total budget stands at about 1.5 million Euros. Not much for a AAA by today’s standards.

In May 1997 the team went to E3 in Atlanta to present an early build of the game in a private booth at the publisher lounge floor (not on the main floor). It was a crude preview built with voice acting performed by the team, and some temporary music. But it was a show-stopper. People would line up before the booth to see what this Outcast was all about.

What they didn’t realise at the time was it would take us another two more years to finish the product. A good one and a half year more than initially expected.

The team went to  E3 1998 for another presentation, and then in 1999 for yet another one, this time with the finished product. At that point, the US publishing arm of Infogrames was being restructured (they just had bought GT Interactive) and much effort was put by people there to save their own butt. They did not put the required resources to support the release of the game in the US. The developers had been working for four years and yet they wouldn’t care much about it. No wonder Infogrames/Atari went down the way they did if they could not care about their own titles.

From VGA to SVGA

During the four years it took to create Outcast, graphics technology advanced a great deal. When the developers started the game in 1995, they were in the VGA era, with 320×200 pixels in 8 bits colors (256 colors) being the norm. Their rendering engine was built around this graphics mode, and it was used that way in their previous title, No Respect.

Have a look at screenshots from the early VGA version, featuring Stan as a main character:

During development however, the developers moved to the SVGA standard providing higher resolution in 24 bits true color rendering. This required adjustments in the voxel engine renderer to feature interpolation of color for smooth gradients rendering. The polygon engine stayed with point sampling however, as bilinear filtering was just too prohibitive in software.

Later, as the game’s launch window was moving further and further, we realised the 3d polygon graphics acceleration would become widely available. The complexity of the voxel environments was not achievable using 3d polygons at the time, so they had to stay with software rendering anyways. Unfortunately, this was a commercial disaster for the developers as people would rush to purchase games that were compatible with their latest 3d cards even if that meant flat corridor games. Hopefully, some get passed that technical oddity and simply enjoyed the game for what it was.

See the first image below for the very first concept logo for Outcast and the second image for the final logo.

Being entirely in software meant they could now program some effects that were not available with 3d cards. As such the developers pioneered such effects as bump mapping, sub-pixel antialiasing and even depth of field. Theyhad to wait a good 5 years to get the first programmable pixel shaders and start doing that in a 3d card. Realtime cast shadows (using screen-space retro-projection) for all characters was also something special, not to mention some quite effective interactive ripple effects in the water. All these effects were clevery programmed by Yann Robert and Gil Damoiseaux.

There is no denying that the music in Outcast is something special. Being a fan of John Williams, Alan Silvestri and other Dany Elfman’s, Franck wanted symphonic music for the game from the very beginning. So the developers planned the budget very well in advance and it was swiftly accepted by Infogrames from the very start of the project.

In 1996 Franck wrote an ad to several film music magazines telling we were looking for a composer for our game. He received many demos, but one amongst them caught his attention. It was from Lennie Moore, a composer based in Los Angeles who had worked previously with the Moscow Symphony Orchestra

Not only his music was fantastic, he was one of the very few who had all the connections to handle the production process from start to end and had past experience working with a full orchestra

He came to our office and Franck talked to him about the worlds and story of Outcast. Lennie was quick to understand Appeals vision and he went back home to work on preview MIDI versions of the music scores for approval. These were the early days of the internet and he would send Franck mp3 files to review that where probably some of the very first music files to fly around the internet.

Ahead of its time

All in all, Outcast is regarded by many as being a game way ahead of its time. It features open world, top notch orchestral score, compelling storyline, action and adventure, high quality dialogues and voice acting, rippling interactive water…

Here’s what GamesRadar says about it:
“Okay, so the hero’s name is stupid and the plot sounds like a rehash of Stargate, but trust us, this action-adventure game was revolutionary. You could freely explore open world cities, mountains and forests (two years before GTA III). You could commandeer extraterrestrial vehicles – in this case, dinosaur-like creatures – for quicker transport (two years before Halo). You could pick and choose missions in the order that suited your playing style (nine years before Fallout 3).”

So whether you like it or hate it, Outcast is at least something special. For Franck, Outcast is a game made with passion, with no constraints of being tied to a particular genre, or please a particular group of people. They just did the game the developers wanted to make, and that was it.

Outcast took about 4-5 years to complete and released worldwide on 31st August 1999.

Hello there! My name is Roy, I am 36 years old and living in the Netherlands. Outcast was the very first game I played on my very first own computer back in the day and it's an honor to share with you my passion for this game through Outcast Universe.