The world of Adelpha is rich with the culture of its inhabitants, the Talan. Here you can find all kinds of examples of this rich culture you will find while playing Outcast.

Every Talan has an essence deep down in him from childhood. When they reach a certain age, the Talan children go to the Well of the Essences in Shamazaar. During the ceremony that is performed there, the child is converted by getting close to the mysterious energy which is continually released at this place. His essence is revealed to him. 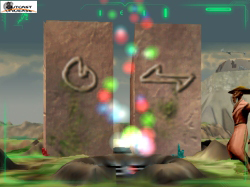 There are four different essences : Fae, Eluee, Gandha and Ka. Each essence will define the Talan and give him the roll he needs to play in the Talan society. Here are the four essences explained:

Fae (fire) – The Talans having this essence are more of the violent type. They are either hunters or warriors but they all have a particularity: if they don’t die by fighting, they will be tormented by shame forever.

Ka (air) – The Ka Talans are only ones that can cast spells and have a particular name: they are called the Shamaz. They are the spiritual and religious guides of all the Talans. They have the power to concentrate their essence to heal the others. This particular status make them be respected by everybody.

Gandha (earth) – Gandha Talans belong to the lower class. They are very dedicated to their work: fishing, mining and farming. Merchants belong to this cast as well.

Eluee (water) – In the essence of Eluee, you will find all the Talans who have a artistic job like musicians and the helidium sculptors.

In the region of Motazaar, where hot lava emerges from the ground, there are miners that mine rare minerals and powerful crystals from the rocks. And when they are mining, they sing a song together in harmony. This Miners song tells us about the prophecy of Kazar and the coming of the Ulukai who would save Adelpha and free all of the Talan from the evil of Fae Rhan.

Below you will find the Miners song, first depicted in the language of the Talan and next the translation into English.

Miners song in the Talan language

We also have a video for you where you can listen to the Talan in Motazaar singing the Miners song: